Intersectionality is a strategy that reveals connections between apparently unrelated experiences of oppression.  Intersectionality was founded in feminist sociological theory and studies “the relationships among multiple dimensions and modalities of social relationships and subject formations” (McCall 2005). The theory suggests—and seeks to examine how—various biological, social and cultural categories such as gender, race,class, ability, sexual orientation, and other axes of identity interact on multiple and often simultaneous levels, contributing to systematic social inequality. Intersectionality holds that the classical conceptualizations of oppression within society, such as racism, sexism, homophobia, and religion-based bigotry, do not act independently of one another; instead, these forms of oppression interrelate, creating a system of oppression that reflects the “intersection” of multiple forms of discrimination. (Source – Wikipedia/Intersectionality)

From the little documentation that exists, ithe concept of intersectionality came to the forefront in the late 1960s and early 1970s in conjunction with the multiracial feminist movement. It came as part of a critique of radical feminism that had developed in the late 1960s known as the “re-visionist feminist theory.” This re-visionist feminist theory “challenged the notion that ‘gender’ was the primary factor determining a woman’s fate.”

The movement led by women of color disputed the idea that women were a homogeneous category sharing essentially the same life experiences. This argument stemmed from the realization that white middle-class women did not serve as an accurate representation of the feminist movement as a whole.

Recognizing that the forms of oppression experienced by white middle-class women were different from those experienced by black, poor, or disabled women, feminists sought to understand the ways in which gender, race, and class combined to “determine the female destiny.” Leslie McCall, a leading intersectionality theorist, argues that the introduction of the intersectionality theory was vital to sociology, claiming that before its development, there was little research in existence that addressed specifically the experiences of people who are subjected to multiple forms of subordination within society.

Audre Lorde writes that many of us who have some kind of social privilege (from whiteness, from class, from gender, or from being citizens of an imperialist state in the Global North) are seduced into joining the oppressor under the pretense of sharing power.

It is this notion that we could “share power” with the élite of our society that misleads some feminists into thinking that they can achieve their liberation on the backs of other women. 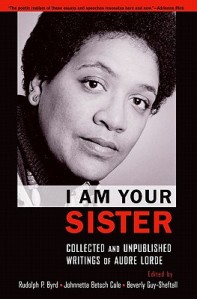 I am a lesbian woman of Color whose children eat regularly because I work in a university. If their full bellies make me fail to recognize my commonality with a woman of Color whose children do not eat because she cannot find work, or who has no children because her insides are rotted from home abortions and sterilization; if I fail to recognize the lesbian who chooses not to have children, the woman who remains closeted because her homophobic community is her only life support, the woman who chooses silence instead of another death, the woman who is terrified lest my anger trigger the explosion of hers; if I fail to recognize them as other faces of myself, then I am contributing not only to each of their oppressions but also to my own, and the anger which stands between us then must be used for clarity and mutual empowerment, not for evasion by guilt or further separation. I am not free while any woman is unfree, even when her shackles are very different from my own. And I am not free as long as one person of Color remains chained. Nor is any one of you.